skip to main | skip to sidebar

Bunny steps and some ramblings!

Here's a painting that I got bored with today D: 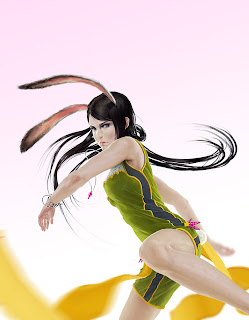 It's rather bland conceptwise (what a pretentious way to put it hahaha) but at least it's something fairly finished :D I also thought I'd show the steps here. 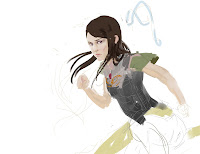 This is pretty much what I started out with, the only thing I had in mind here was that I wanted to do some fighterly chick on a white background. Of course it's better to plan a bit more than that :| But this time, and after doing lots of work that always was plan-sketch-render, doing something directionless felt really refreshing.

At this point I started thinking about the colors and started regretting not to have thought about anything... early enough hahaha. Not much to say here really, I tried out a lot of other different colors, and like I said, the process of doing something without having the final result planned is really enjoyable.

In my head, at this point the whole painting is like a big sketch rather than a drawing that just gets colored. I'm really playing around with every part of it to see if I can do anything that I like. Obviously, this is something you can't really do a lot with client work. I made the head both larger and smaller again, put in some other diagonals to see what kind of flow I was looking for, tried a couple of new positions for the arm, raised the leg... lots of things. Somewhere around here I also changed the colors, I remember wanting something autumnish and thus putting in greens and oranges rather than the gray and pink. 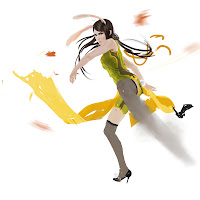 One thing that has been bothering me the whole time is the composition, that's why in every step the image is cropped differently :/ It's a bad habit that lots of digital guys have I guess. Seems like at this point I thought making it a full-body thing would be a good idea, also stockings to get more dark shapes in the lower part of the image. I actually like the graphic impact they had, but then in the end failed at making them read because their value seemed to close to her clothes. 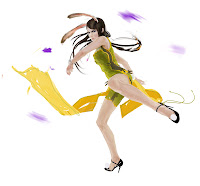 I remember that raising and twisting the leg a bit more gave me an "aha" sort of effect when I tried it out, so I kept that. At this point I also thought that there probably wasn't gonna be much subtleness in a picture like this, so I changed the colorscheme again to have complimentarys rather than analogous colors (again, what a pretentious way to put it... what I'm saying is that I just wanted it to be more "in your face" to go along with the rest.) At this point, I also started actually rendering out stuff, which most of the time means I settled for the drawing/position of stuff. This is also where it usually gets really boring, AND what takes the longest :/ 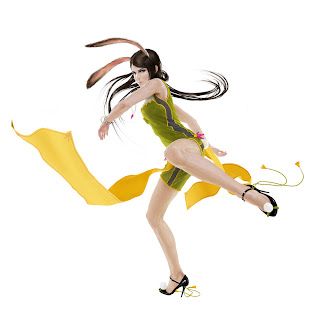 Done with rendering. NOW WHAT? In the end I cropped out pretty much everything, because the final fullsized thing looked so... stiff o_o This always seems to happen, but the actual problem is not that rendering makes the pose or anything stiffer, it's that all the messy brushstrokes and sketchy lines in the beginning make it look more dynamic so you don't notice that it's actually stiff. The best way to avoid it would be - of course - planning it better. Which brings us back to the start :D

And because I got them lying around, here's also a couple of sketches :) 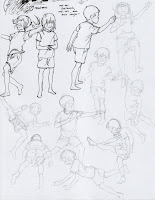 Drew this for someone I met while playing Magic at the comic store, people go crazy when they find out you did stuff for that game =0 He was really nice and taught Jana and me how to play, so I made this for him. Ugh wings D:

I guess that would be it for now. See you guys :D
Posted by Hannes

Yay, update! Thanks for the step-by-step.

Woot! It's refreshing to see a bunnygirl instead of all the catgirls :) Very interesting to look at your step-by-step! Thank you for that! I wish I had some more freedom to play around like that when working traditionally....T_T
Love your sketches, too <3

Her guard's down! D:

I must say I enjoy the step by step too, as well as the sketches.

I really like the last one, the angel, mainly the feeling that she projects (grandiose?)

Thanks for writing down your thoughts on the progress. I think they are very interesting.

so awesome. really glad to see your updates:)

i would go crazy if i met you too dude.

those steps you provided are really helpful and your thought process is an interesting approach... i like it!

hey dude, finally you start a blog, hope to keep it up to date, will fallow your new stuff :P btw I share the same opinion for CA ! aand if you forget who am I? little joker ( ex nickname "atlantik" ) peace!

I've heard of that contest you've had with Jana a really long while ago (years ago). I think it was something about who draws most like Linda Bergkvist after a few months practising.
I didn't hear who won the contest in the end. But, the only thing that actually interest me is how you got that good in such a short timespan. I was watching your works on deviantart and we (Platina and I) could literally watch you getting better with every submission.

I'm really jealous because I'm kinda stuck and I don't have the feeling I'm getting any better drawing. (I don't have a lot time to practise, either.)

Anyway, I think you're doing great and you extremely improved the past few years.

hey
i'm glad to see you works again !
i'm curious about your recent activities, any school or freelance working ?

beautiful!! :) thanks for sharing!

Hannes
I like to... draw :O And I also work as a freelance illustrator. Email me: algenpfleger@googlemail.com